Fidelity has again published its annual Fidelity Analyst Survey 2019. It is a forward-looking assessment of sectors and regions built entirely from a bottom-up view.

Each year, they ask their analysts what the companies they cover are expecting in the coming 12 months and how managements are positioning their businesses as a result. This year they gathered 191 responses from 165 analysts (some analysts cover more than one sector) from the equity and fixed income teams. The opinions are formed from over 16,000 company meetings throughout the year and offer a unique, forward-looking perspective into how CEOs, CFOs and COOs are thinking and acting.

Over 80 per cent of global market capitalisation are covered, and the results provide a country- and region-specific barometer of company managements’ hopes and fears for the coming year.

The survey provides an aggregate measure of sentiment of the covered companies.  This sentiment indicator is based on 5 factors; management confidence, capex, dividends, returns on capital and balance sheets. Then these analysis are aggregated on sector and regional level.

The annual Analyst Survey reveals a corporate landscape of fall in management confidence and quiet positioning for lower growth. But while the optimism might be over for now, recession is not yet upon us.

The aggregate data suffered its sharpest drop ever, falling from 1.6 in 2018 to 0.6. Despite the alarming plunge, it remains in positive territory – this is not a retrenchment according to Fidelity’s analysts.

China was the hardest hit region, with sentiment declining from 1.4 to -0.4 (a number below zero indicates worsening sentiment), although government stimulus has proven effective at restoring confidence in the past.

Within the sectors, healthcare was the only bright spot, with sentiment increasing for the third year running from 1.1 to 1.4. Nominally, consumer discretionary analysts were the most downbeat, averaging -0.5 across the sector.

Global sentiment falls from its peak 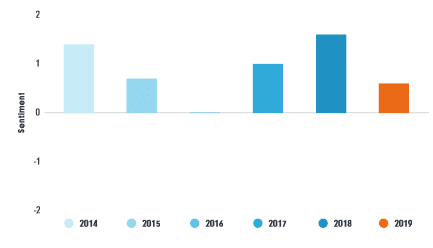 In 2018, costs were the main driver of returns for the North American- whether input costs or the cost of money. The number of analysts citing input cost inflation as a problem has more than doubled to 37 per cent with wage rises a significant contributing factor, while 77 per cent of analysts reported a moderate or strong increase in pay. On the other hand, only 39 per cent indicate increasing capex, down from over half last year.

Company funding follows same path. A full 59 per cent of analysts mentioned funding cost increases, well over double last year’s figure. A third of analysts expect an increase in default rates this year rising from 16 per cent last year. With more volatile equity markets and the potential of more defaults scaring bond investors, companies could be forced to change their capital sources. Indeed, analysts say that most companies which are dealing with higher funding costs are relying on more expensive bank loans, whereas last year most opted for bond or equity issues.

The region posts one of the sharpest reversals in sentiment, despite Prime Minister Shinzo Abe set of reforms, deflationary forces are back in force.

Half of all analysts expect companies in Japan to increase dividend payouts in 2019, more than any other country.

Japan’s GDP growth figures have slowed over the past year with 29 per cent of analysts think returns on capital are dropping, up from 7 per cent in 2018, driven by slower end demand growth. Less than a third of corporate investment is directed towards growth spending, while that figure was nearly half last year, indicating “increasing reluctance for big capex decisions,” according to one consumer analyst.

Analysts wanted to answer the lingering question; how deep is China’s economic slowdown, and what response the Chinese authorities are prepared to do ? Information collected by analysts tend to confirm there are reasons to be concerned about China’s economy, while some positive data mitigate that picture. More importantly, it remains to be seen how effective fiscal stimulus will be.

Analysts report that company’s management are the least confident to invest among any region globally, hence capex is expected to reduce significantly.

Liquidity is seen as abundant in the financial system after several easing of banks’ reserve requirements in the past year. The main concern is that it isn’t making its way to end users, including privately-owned companies according to analysts.

Contrary to the rest of the world, where deleveraging is at work, some 33 per cent of China analysts expect leverage to increase in the companies they cover, rising financial stress in this economy, with two third of those analysts citing deteriorating cash flow as the main reason for this.

The region is exposed to the uncertainty of the trade war and headwinds from a strong US dollar. Both challenges remain with China’s slowing economy adding more trouble. The region’s economy is gradually moving into maturity and slowdown, but six out of ten analysts believe we are not yet at the end of the cycle.

The corporate dynamics are changing in the region to go digital: 88 per cent of marketing spending increases are allocated to digital and none directed towards print or outdoor. There’s growing attention on more complex forms of IT with a bigger proportion of spending on cloud technology and security systems rather than mobile. As we report elsewhere in the edition, ESG issues also appear more prominently, particularly around supply chains, health and safety and executive compensation.

Europe has seen a slump in confidence. Analysts mention macro, interest rates and effect of Brexit on consumer confidence as the largest risk factors affecting the financial sector.

Fiscal stimulus is not expected to give a help in this slowing environment. Over three-quarters of analysts believe fiscal stimulus will have a neutral impact compared to just 17 per cent last year.

Analysts note that Brexit uncertainty is increasingly weighing on investment decision-making with negative impact on strategic investments by UK companies, as well as on UK investments from others.

Healthcare sector is one of the notably impacted industry by a no-deal Brexit, with a knock-on effect on medicine supply chain. Th number of analysts covering the sector expecting a negative investment impact has jumped from 25 per cent to 64 per cent.

Interestingly, the region still has the most positive sentiment indicator reading, even though it has receded from last year. One of the reasons cited by analysts is that countries in the region have managed to come through a lot of corruption cases and elections and is still benefitting from strong commodity prices. Industry cycle is also recognised as being in expansion phase by 92 per cent of analysts covering the region.

But the region is not free of concerns. Three quarters of analysts point to protectionist measures having a negative effect on the region. Export of Mexico and Central America on the US contributing largely to that effect, but also investments in the region are expected to be impacted.

Analysts expect declining returns on capital and increase in funding costs as the main cause to that drop in sentiment. Negative outcome from Brexit is also cited.

As usual, sentiment within the energy sector is strongly linked to oil price, therefore it went down towards the end of 2018. Drop in sentiment is the biggest in the survey this year.

Analysts forecast a oil price to average $70 compare to a low of just over $50 in December 2018, with the supply side dynamics having the biggest influence. Currency volatility may have an impact for that sector either.

Materials sector is expected to be intimately linked to the fate of China’s economy, the biggest consumer of many commodities and base materials. Analysts expect declining returns on capital, due to a combination of rising costs, and slower end demand with declining pricing power.

Swing factor to that would be linked to a stimulus package by the Chinese authorities which remain uncertain at this stage.

Analysts see rising costs as the main focus in this industry, with the Fidelity Sentiment Indicator falling sharply from 2.1 to 0.7. The indicator remains positive, showing analysts expect little change in 2019. Most of the analysts expect cost increases to be passed on to consumers, to the exception of some budget clothes retailers in the US.

Wage rises as well as regulation are seen as the main threat to the sector by analysts.

Consumer discretionary analysts at Fidelity are the most pessimistic in this year’s survey. The sector’s Sentiment Indicator is at -0.5 with almost two-thirds of analysts reporting that management is less confident than last year.

Slowdown phase and declining returns on capital are cited as the main reasons of that sentiment. This environment is seen to benefit to the largest companies with resources to sustain pressure from the loss of pricing power.

Once the darling of the markets, the technology sector has fallen in 2019, declining to 0.5 points from 2.1 points a year earlier.

Analysts report that only 17 per cent of company managements are more confident to invest in their businesses than last year, compared with 84 per cent when we asked the same question in 2018.

The main reasons for that turnaround in sentiment is  that the exceptional boost last year from tax cuts and other incentives in the US that generated IT spending is expected to disappear. Hardware is seen as more exposed to that fade, while software and cloud should benefit from still strong spending

Financials recorded its first fall in sentiment in three years, but the overall measure remains positive and the drop itself is, at half a point, the smallest among the sectors.

Analysts attribute that change to the end of expansion associated to the start of a slowdown. Central banks hesitation and changes in interest rates direction have had an influence.

Banks are seen as conservatively positioned in their balance sheet management. Trend toward deregulation is also cited by analysts.

Healthcare remains a favorite by analysts. It is the only sector to show an improvement in sentiment, increasing from last year’s reading of 1.1 to 1.4, making it the most optimistic of all.

Healthcare also stands out for its overall location in the business cycle. Not a single analyst thinks the sector is in slowdown.

Increasing expected returns on capital and management confidence on developing new markets are the main drivers of that optimism. Demographic is also seen as supportive to the sector.